Daffni
I'm a bit ancient and decrepit but still busy. I write poetry, stories for children, mainly about sheepdogs, and I translate. So far the books I have translated are first: Pushkin's Notes For a Book on Peter The Great, which he never wrote as he was killed in a duel. This was for the Pushkin Centenary Collection. Secondly, just out, Letters From My Mill by Alphonse Daudet, one of my favourite books ever since my school days. It has just been launched. All my books csn be purchased from my website. http://www.merilang.com/ 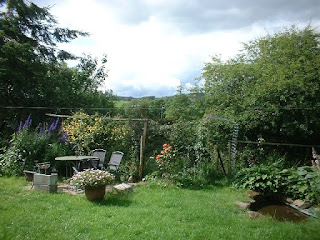 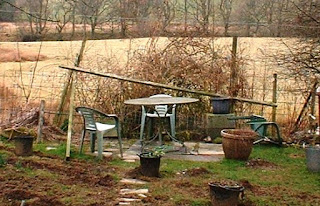 Wasn't much of a summer, was it? I quite enjoyed some of it as, at least when I could abandon the computer, I could do some gardening. I did have quite big areas in front of and behind the house. Behind was only accessible by either going right round the house and through several gates or through the archway where they used to keep the carts [and I used to keep my goat]. A small part of that is raised beds and slate paths but it has been taken over by a jungle of ras[pberries and tay berries, rhubarb and black currents so I leave it as it is and gather what i can. All the rest of the back is grass and is mown by pet sheep. I am in process of extending it to make a big playground for dogs, including training for Dyfi. The latter will happen more in the winter as I can then bribe the woollies into that area with food and make him behave in their vicinity. That's the plan anyway. I'm awaiting a nice big shed to keep dog agility equipment and grooming wherewithall.

The front I've kept as garden and, with an hour a week of help, I can more or less manage that and it has been quite pretty this year. The improvements included a rockery beside the front door and two weeks ago I was putting Dyfi's lead on before a walk when Silver ran full tilt into my feet, canoning me into the rockery face down so I have spent all that time eating only spahgetti, soup or bread with no crusts. Just got to managing marmelade with thin peel. Apart from such accidents I manage very well gardening now as, so long as I'm on the flat, I don't even notice the knee. My right arm is getting worse but I'm getting fairly adept at some things left handed.
Two photos give an idea of the front garden. One is my trellis after last winter's gales, showing also the state of the lawn after much circling by Silver, who runs in circles whenever excited [that's how come she collided with me]. The other is after resurrecting the clematis and putting green plastic mesh on the lawn for the grass to grow through. She still circles but only mows pathways, doesn't make excavations.